Over 200 racers and attendees from seven different states clicked into their race skis and slipped on their ski boots to head toward the Buck Chairlift that provides access to the “Cheers to Lou” NASTAR race arena, named after NASTAR legend, Lou Batori. Lou was infamous for pushing the NASTAR age categories older and older each year until he passed away at age 107 leaving a legacy of ski racing behind.

Both Friday and Saturday provided bluebird sunny days with many familiar faces from local race leagues like Team XLR8 from Mt. Brighton and the Crystal Mt. Race League who meet every Thursday to race gates. The family-friendly environment was exciting and the fun loving smack-talking was off the walls, but is was all in good fun as the adults raced each other Saturday morning and kids took turns running the course in the afternoon. Two-time Olympic Medalist, Andrew Weibrecht, set the pace for the weekend and took the time to sign autographs and hang out one-on-one with NASTAR families.

All of the racing that was done on Saturday was a qualifier for the Race of Champions on Sunday along with the family and team races. The format for the Race of Champions was a dual head-to-head, elimination with the prize money being awarded to the top four men and top four women. In order to qualify, racers had to be among the top 32 male and 32 female racers based on NASTAR Team Points which are awarded within age and gender. This means the fastest racers within age groups qualify for the finals even if they place third or fourth in their age group. Essentially, what this means, is that a younger or older racer has the chance to complete for the overall win against a racer that is much faster. For example, a six year-old could complete against a 21 year-old racer and have an equal chance of winning in the head-to-head format.

“The format is just like a drag race,” explained NASTAR Director, Bill Madsen, who was present at the event. “Picture a corvette racing against a pinto with a handicap. You’ve gotta win the race to move onto the next round.”

The above video describes how the Race of Champion start-lights work with an added handicap in the dual format for the Race of Champions. The result? A roaring and screaming crowd at the base; the air filled with the sound of cowbells and cheering fans as the racers who start with their handicapped time at the top, finish only hundredths of seconds apart as they cross the finish line.

The women's Race of Champions was won my nine year-old Grace Ulbrich who raced Dana Allen, who is in the 55-59 age group and the final race came down to the wire as Grace crossed the finish line ahead of Dana to take the win. Natalie Checkley, age group 14-15, ended up in third place by beating Helena Hoffman in the small final.
“This set-up is really cool because in the first round we got to watch Natalie, the number one seed, race against the 32nd seed Pat Holmes who won the 80-84 age group. Pat had a six-second head start, but Natalie was able to chase her down just barely beating Pat to the finish,” said Madsen. “The crowd was truly going wild at the bottom.”
78-year-old Larry Walter had a close race against 14 year-old Hunter Post to make the final aginst Evan Kulp. Evan had to make it past Din VanFarowe to make the the final against Hunter. Hunter got a head start in the final race and Evan charged down the Cheers to Lou trail but missed the win by 17 hundredths of a second handing the win and the $1000 first place prize to Hunter Post. Evan took home $750 for his effort, Din was awarded $500 for third place and Larry Walter earned $250 for fourth.

With the inclusion of the dual-panel racing in the U.S. Alpine Championships, the FIS Ski World Cup, World Alpine Championships and the Olympic Winter Games, NASTAR is excited to provide recreational racers with the opportunity to compete in a head-to-head format.

“Reflecting on the event, the races could not have run more smoothly throughout the weekend,” said Steve Kermode, V.P. of Skier Services at Crystal Mountain, Mich. “The families and kids smiles went a long way. We were really pleased, especially with the Race of Champions because of how many surprise finishers we saw cross the line. The fast guys were not necessarily the ones who came out on top!” 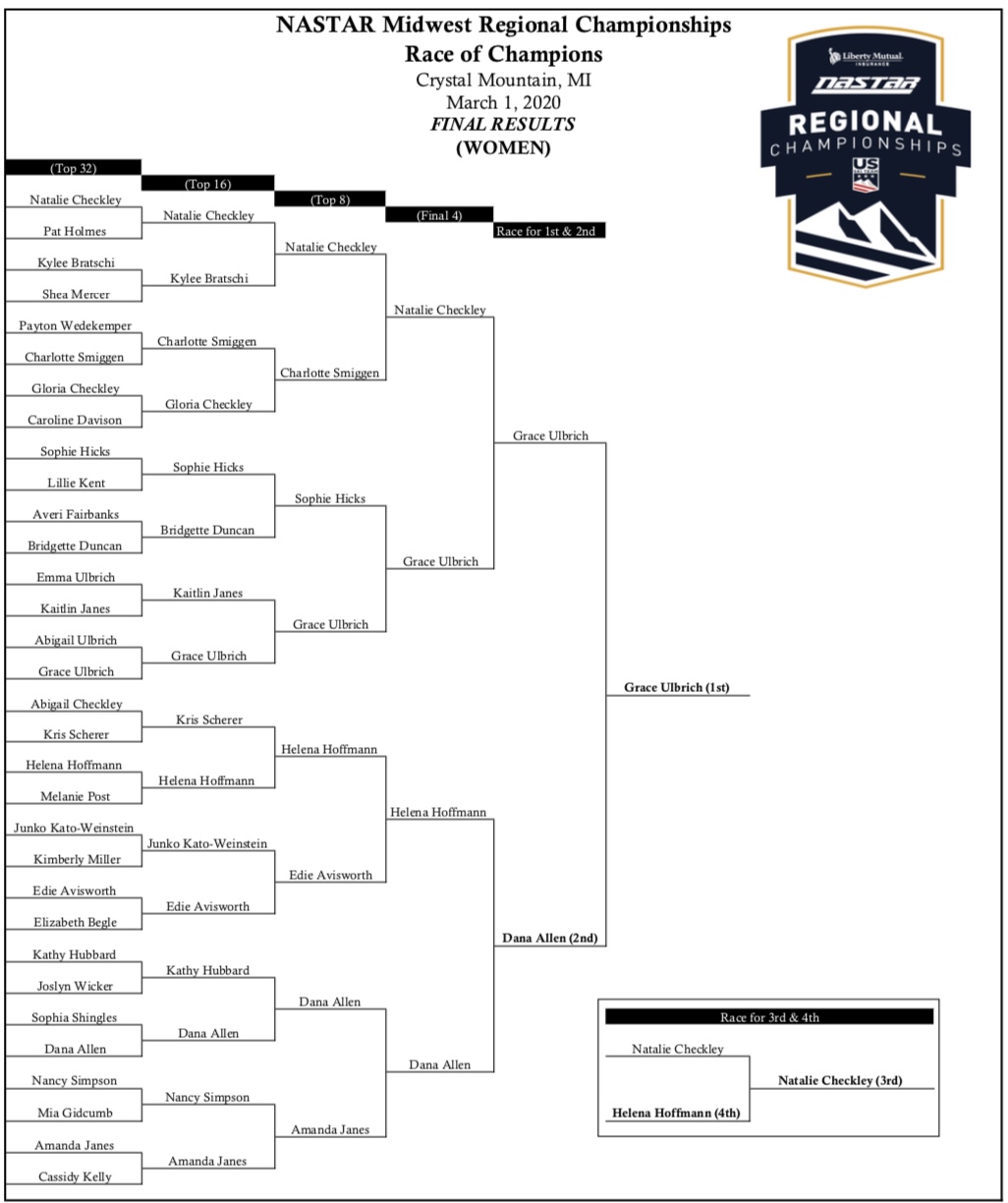 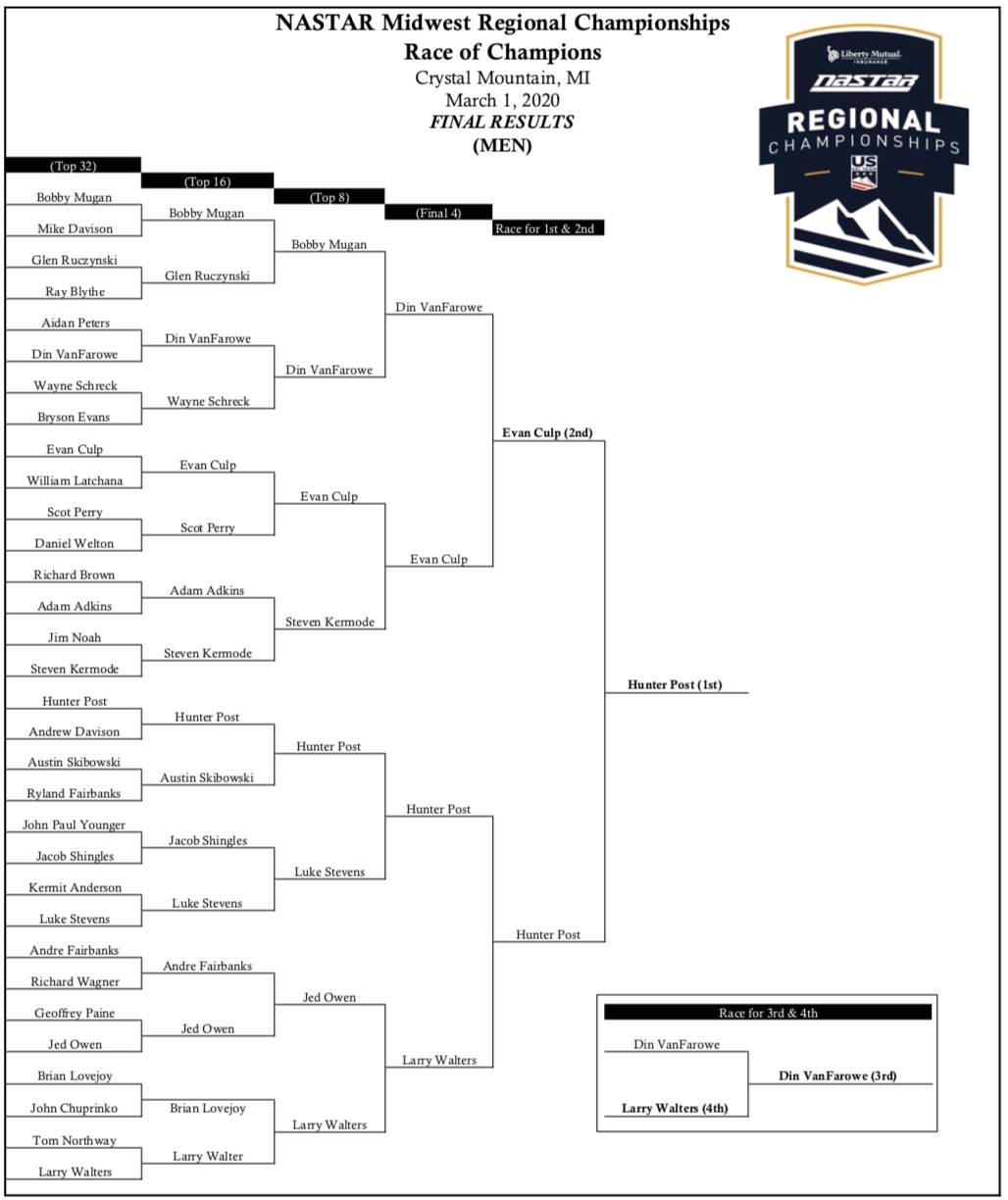 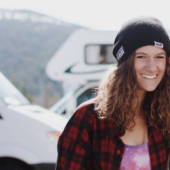 Megan Ganim hails from Ashland, Ore., where she grew up racing the PNSA circuit before continuing to race USCSA at the University of Oregon. As team captain for two years, she also pursued a degree in public relations and fled to the mountains any chance she had. She currently resides in California and serves as an Editorial/Sales Associate and NASTAR Content Editor for Ski Racing Media.