How the U.S. Ski Team is adapting to the ever-changing COVID-19 times. By Maggie McCutcheon

This article was originally published on Skimag.com in August, 2020

August marks a time when the U.S. Ski Team usually sends athletes to South America for on-snow training to test new equipment and get ready for early season competitions. This year, things are different. In early March the FIS World Cup Tour came to an abrupt end due to COVID-19. April and May are normally off-months for the athletes, but this year the team worked tirelessly through those months to organize extensive protocols, including reworking their online athlete platform to check and monitor coronavirus symptoms.

Thanks to these efforts and the hospitality of domestic resorts the athletes have not missed any days on snow this summer. Copper Mountain in Colorado, plus Mt. Bachelor and Mt. Hood in Oregon, are among the ski areas that have found ways to accommodate the U.S. Ski Team.

“[These mountains] have allowed our athletes to have largely successful camps with great snow conditions,” says Troy Taylor, High-Performance Director for the U.S. Ski Team.

Taylor has been with the team for five years as the High-Performance Director. The job entails oversight of every aspect of athletic performance, from sports psychology and medicine to conditioning plans. Taylor is constantly finding new ways to enhance the athletic performance of individuals by introducing new ideas, techniques, and machines to the U.S. Ski Team as well as USSA coaching staff across the country.

Due to the pandemic, Taylor and the team initially worked with the Olympic and Paralympic committee to establish testing facilities and protocols. The team’s USADA lab, usually reserved for drug testing, was converted into a COVID-19 testing facility capable of performing a saliva-based coronavirus test that provides results within hours.

Taylor explained that although rapid testing is extremely beneficial for the team, it is a priority of the team to test in a responsible manner that does not affect the testing capabilities of local hospitals. The team is “respectful of mountain communities and works to avoid any burden on their healthcare,” says Taylor. Athletes are required to have two negative tests within 24 hours of each other after every travel day and before they can attend team events.

The protocols in place have been stringent and enforced. Athletes not only have to report symptoms twice a day, but the team must also complete surveys on a weekly basis for contact tracing purposes. The U.S. Ski Team has fostered a safe environment for athletes to train in, but “everything is ultimately up to the discretion of the athlete—if they don’t feel comfortable at the Center of Excellence or at a camp or joining a bubble, they are not required to,” says U.S. Ski Team athlete George Steffey, Steffey, who started on the National Training Group after his high school graduation from Stratton Mountain School, is in his fifth year with the U.S. Alpine Team. After recovering from a knee injury sustained in the 2018-'19 season, Steffey grabbed a World Cup start during the 2019-’20 circuit and has now secured a spot on the B team for the upcoming year with the U.S. Ski Team.

This spring, Steffey was in Europe competing in Europa Cup events when the virus hit. The team was sleeping in their hotel in preparation to travel to another venue when “the coaches woke us up at four in the morning and told us we had to get back to the U.S. because there was going to be a travel ban in place soon and the season is canceled,” Steffey recalls.

Since that departure, the team has developed extensive and ever-evolving protocols to protect both athletes and the communities they are in. The goal is to be “conscious of the world’s situation,” according to Taylor.

“I’m probably one of the most performance-focused people you’ll ever meet, but this might be bigger than performance. Every decision we are making we are trying to have our community locally and nationally in mind and see the impact on our communities,” he says.

During summer camps each host mountain has also had its own protocols in place to ensure social distancing. At Mt. Hood, the capacity has been controlled by Oregon laws banning overnight ski camps for camp-age athletes. In lift lines, six feet of distance is required between skiers.

“In a normal year, if people stood six feet apart, in the lift line it would take up half the hill,” says Steffy. Skiers and riders are used to necktubes and Buffs to protect from intense summer rays reflecting off the snow, so wearing face coverings has not been an issue.

Both Steffey and Taylor are focused on the controllable variables of the current situation. The next few months for the team are uncertain, but, according to Steffey, “we’ve gotten used to shooting from the hip. Do what you can for now and wait for hopefully good news on where we can ski next.” 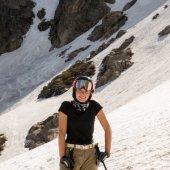